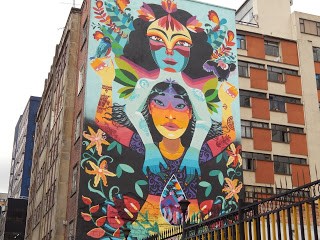 There is a legend in the Andes about a beautiful princess who was whisked away by a Condor never to return. I think that story can apply to the spirit of any traveler. You can visit a county and be whisked away by the power and purpose of old traditions and symbols of the country, and your life will never be the same. The Andean people and their spirit and simple ways touched me when I took the Overseas Adventure Travel trip Colombia’s Colonial Jewels and Coffee Triangle. On that trip, especially when I was appreciating all the art I saw in Bogota and Medellin and connected it to the legend of the indigenous Muisica people, I felt that in my travels I flew with the spirit of the condor, both independently and with the group.

One of the things I did on my own which I booked through a Viator.com tour, was to hike to the lagoon where the indigenous Muisca people found the gold that is in the Gold Museum, and which is part of the legend of El Dorado. El Dorado is where legend has it the streets are paved with gold. I had to climb 150 stairs at one point, huffing and puffing to get to 10k feet to see the lagoon. A week later, once the OAT tour began, we visited the Gold Museum, and it was so very meaningful to me. And having traveled quite a bit around both Central and South America, I could tell that it was the best Gold Museum I have ever seen, with the most beautiful artifacts anywhere in the Americas. Of course, it ties back into the legend of El Dorado and the Muisca people, and I was grateful that I had hiked up to the top of the lake where so many treasures originated. 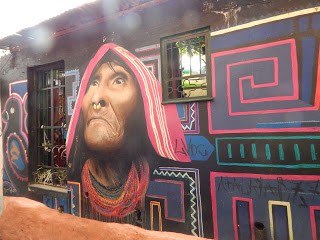 But all on one street in the Candelaria district of Bogota are three additional museums that I visited. There is a total of five on the same street. The best was the Botero museum, an interesting Colombian artist, and there were write ups in English and Spanish. It’s connected to the Fine Arts Museum of the Bank of Colombia, which is also bi lingual and has all modern art. I couldn’t figure out what the connection was to the Bank of Colombia and art, until I got to the attached Coin Museum. That, of course, was all about the history of money in Colombia including bills, and that was all in Spanish. Two other museums worth noting in Bogota are the Convent Museum and the Military Museum

Once our tour group got to Medellin we visited another Botero museum, so I was glad that I had taken the time to see the one on Bogota. His art is all over Colombia, and he is literally as revered as the Nobel prize winning author, Gabriel Garcia Marquez, who has a cultural center named for him in Bogota right near the five museums. But both Botero museums also had some fantastic modern art from other artists. So for art lovers, this trip is a real treat if they take advantage of seeing all the museums that are available – and in many cases, free of charge.

One destination we had during our time in Medellin was Guatape, and it’s famous for its colorful and artistic zocalos. A zocalo in Mexico is a public square. In Colombia, it’s a piece of art on the exterior of the house, and it represents something about the individual living there. It’s usually vibrantly colored, sometimes three dimensional. It can be a book if the owner is a book lover, a horse for a horse lover, and so on. I honestly don’t think I have ever seen a town with such vibrant colors before, and it reminded me of the stark contrast with the history of the country. This is especially true since we had a discussion on the way there about Pablo Escobar, and prior to seeing Guatape, we were on a boat ride around a lake that once was surrounded by many of his properties, one where he was killed in a shoot-out.

But seeing these unique zocalos are a fun and lively addition to the trip, especially since we met one of the artists after we toured the town in tuk-tuks to see them .As I experienced it, they are on the outside of nearly every house and structure in the main area of  Guatape, making it one of the most vibrant and colorful places I have ever visited.

Seeing artistic venues in a country, which I do every chance I can, sheds a light on the culture and history of the country that might not otherwise be illuminated for the traveler. Sometimes when I do see a museum at the end of a trip, it literally shows me art that is representative of all that I have experienced, seen and learned about during the trip. In addition to other magnificent street art we saw in both Bogota, Medellin and Cartagena, the museums and colorful zocalos we saw on this trip exposed me to a hopeful country, rich with culture, and dancing to the joy of its own art.