I was greatly disappointed to learn during some of my recent adventurous travels, that I get severe reactions to all the various anti-malarial drugs.  For this reason, I felt that I would never be able to go on an African safari. Of course I consulted my physician, but I also did a significant amount of research. In the end, I took a magnificent trip to South Africa with Grand Circle Travels (www.gct.com) on their Highlights of South Africa trip. I traveled from May 12 to June 11 2016.  I ended up taking a wonderful cultural tour that hit all the high notes of South Africa, and also had 12 safari days out of 30, and not one mosquito bite!

The Planning and Research

In order to ensure a malaria free trip, I did significant research ahead of time. In addition to the CDC web site (www.cdc.org), I also used a British version called Fir for Travel (http://www.fitfortravel.nhs.uk/home.aspx)_  which sometimes yields different results. One of the biggest differences I have noticed,  is that while the CDC recommends drugs even for low risk countries,  Fit for Travel suggests instead that for “low to no risk” countries,  bite prevention  measures only are needed. For me, this made all the difference in the world. It is important to understand the low risk factor, because a malarial mosquito needs to bite an infected host to transmit the disease. If there are not many recent casas of malaria in the country or area where you will be traveling, and you are traveling during a low transmission season as I was planning to do, the risk factor goes down even further. Additionally, the CDC web site for many of the countries I researched has small print that says specifically, “This risk estimate is based largely on cases occurring in US military personnel who travel for extended periods of time with unique itineraries that likely do not reflect the risk for the average US traveler.”

The only area I had to work around was Kruger Park, South Africa’s largest park that is home to the Big Five, which is in fact malarial. But not during their winter, from May thru September according to the Kruger Park web site. Then, once again, only bite prevention measures are necessary. So this provided guidance for when to go and what to do in terms of bite prevention, which I took seriously.

Another factor me, was that malarial mosquitoes bite only from dusk to dawn. Mosquitoes that carry other diseases such has Dengue and Zika, bite dung the daytime. So for this reason, I just didn’t want to get bitten period. I also selected the Grand Circle trip, because their accommodations were all in hotels, where I faced a very good chance that I would not encounter a problem with mosquitoes in my room at night. I even did a Google search on each hotel and location to ensure that the itinerary went to low risk areas, especially during that time of year.  The hotel web sites frequently provided this information. I also paid close attention to the photos to see if they provided bed netting.

From past trips, I already knew that deet, eucalyptus spray on my skin, and permethrin spray on my clothes kept the mosquitoes away from me. So the last part of my planning was to stock up on these items and spray my clothes well before the trip.  I did in fact, also travel with a bottle of the anti-malarial drug Malarone left over from a past trip, as a post-bite measure of necessary.

While the decision whether or not to take anti-malarial drugs is a very personal one based on many factors, I was additionally encouraged to read the CDC recommend that  the risk of adverse side effects needs to be weighed against the duration of the trip,  the style of travel, and the time of year. This may seem redundant, but it was consistent with my findings, so added additional verification that for me anyway, I was on the right track and stood very little if any risk. Specifically they state, “You may need to take prescription medicine before, during, and after your trip to prevent malaria, depending on your travel plans, such as where you are going, when you are traveling, and if you are spending a lot of time outdoors or sleeping outside.”

I arrived in Johannesburg and spent two days there, having been met by a Facebook friend at the airport. He is a professional hunter, but he showed me around. I stayed at the Marriott Protea Hotel Balalaika in the Johannesburg suburb of Sandton, right next to Nelson Mandela Square. I paid my friend $250 for two days of touring, mostly in Pretoria and sights in that area. On the third day, Outlook Safaris picked me up for the six hour drive to Kruger Park.

The experience with Outlook Safaris was superb. With the devaluation of the Rand  coupled with the strength of the dollar, my $800 included a  night safari drive by park rangers when we arrived; five nights in a round, typically Zulu style hut  with  full kitchen, bathroom, and daily service; two  safaris a day; a huge breakfast and dinner daily; a trip to the  famed Panoramic route instead of one safari; a hike into Kruger park with rangers one morning instead  of another safari (complete with the sounds of baboons and lions, and a very close encounter with a mother rhino and her baby); a pet warthog outside my hut each day;  and roundtrip transfers to and from Johannesburg. All of this with no single supplement! My contact there, Elsabe, was quick to respond to all my email inquiries, and the online credit card booking was easy and efficient with quick confirmations.  Elsabe assured me that the huts in their Skukuza Camp (by the Kruger Gate) were sprayed, with windows that had screens to keep out mosquitoes.  In fact, I didn’t notice any mosquitoes while in Kruger. I did however, see the Big Five , spotting the elusive leopard on the last morning, in addition to mating lions, a lion with a fresh male Kudu kill, and even two of the  150 or so cheetah that reside in Kruger. 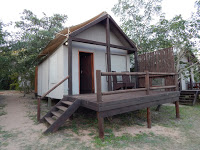 The base tour with Grand circle was everything I could have hoped for. After two nights in Johannesburg and a city tour as well as a visit to the townships, the next day we drove back up to Kruger, taking the scenic Panoramic route along the way. I was a bit concerned about duplicating what I had already seen with Outlook Safaris, but my fears were ill founded. This time, we saw completely different lookout points, and even more of the beautiful Drakensberg Mountains with a 45mntue hike. Our two nights at Kruger had been changed to a tented camp lodge in the Nkambeni Safari Camp. I was lucky enough to see the Big Five two more times, and yes, mosquito free. The tented camps did however, provide citronella soap and lotion, which I used throughout my trip for additional mosquito protection, and had mosquito nets. We had the additional advantage of visiting a small rural village and meeting the children, an experience that is part of every Grand Circle trip. This time it was at once personal since our tented camp was on the same land as the village.

This trip is one of the few that includes two nights in Mbabane, Swaziland as well as trip to the Zululand part of South Africa. We were treated to two nights in Bushman’s Lodge in Zululand, with safari opportunities at Hluhluwe in the Kwazulu-Natal province. Once again, we were at very low risk and really no risk for malaria during their winter months, all according to their web site.  That part of  South Africa has malaria due to its proximity to Mozambique. However, I kept applying my mosquito repellent at night and early morning.

The base trip ultimately ends up in Cape Town and spends time in the magnificent Garden Route, which is all malaria free. Once we reached that part of the trip, from Port Elizabeth all the way to Cape Town, I was home free in terms of needing mosquito protection.

Zimbabwe and its more year round moderate risk for malaria was a greater challenge for me after leaving Cape Town. However, we stayed at Elephant Hills Resort, which is very well protected, and they take great pains to spray for mosquitoes. The hotel staff sprays upon request, and this was the only other hotel that provided bed netting during the trip.  Zimbabwe was in fact, the only place where I did see a day time mosquito, but none at night. Not even during the Zambizi River sunset cruise. After seeing Victoria Falls on the first day and taking the Zambizi River cruse that night,  the following day I took the one day excursion to Botswana, which only whetted my appetite for a more adventurous future safari after what I saw and experienced at Chobe National Park. Malaria eradication efforts have been successful there; the CDC now rates Botswana as “very low risk “for malaria. So a future trip to Botswana during their winter is now in the planning stages – malaria free!