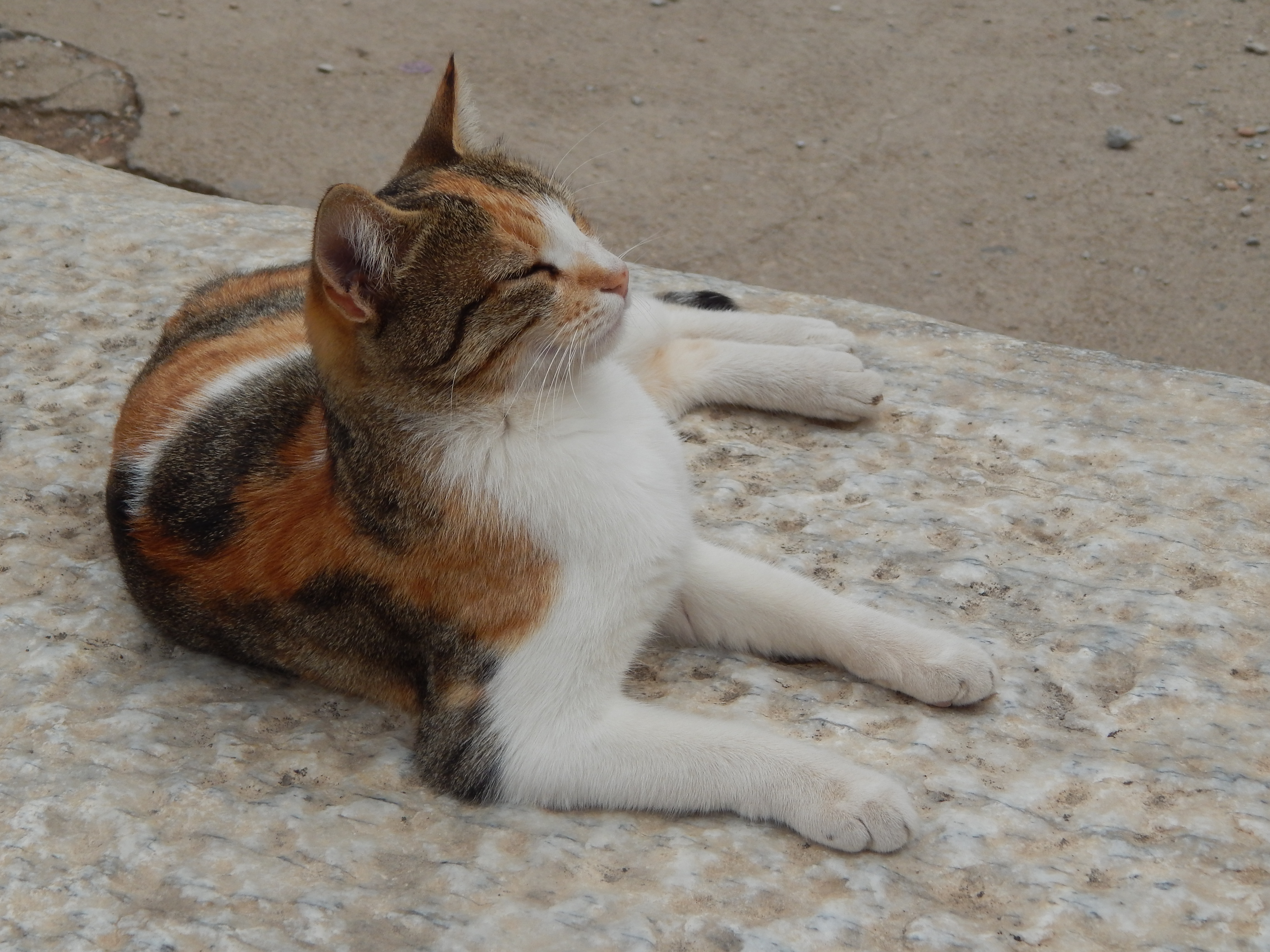 There are so many stray cats in North Africa, it reminded me of my travels to Turkey where we saw so many in Ephesus what were considered famous historically. So that got me thinking about he cats I saw in Morocco on the Overseas Adventure Travel Trip, Morocco’s Sahara Odyssey.  I wasn’t sure if these stray cats dated back to the time of Cleopatra as they did in Turkey, but I was curious about their origin. Even though I’m not particularly a cat person, this is of course, one of the joys of travel; the ability to learn about things that don’t necessarily cross our paths (in this case, quite literally).

We meet these furry four legged Moroccans on a learning and discovery stop somewhere between  Casablanca (where I joined the tour) and on our way to the first stop on our pre-trip in Chefchaouen. The truth his however, that cats can be found in abundance in just about every city in Morocco, and in one  famous garden in Rabat, historic Kasbah of the Udayas. There was also once a cat café nearby. I was there in mid -August, and they were hiding in the shade just as much as we were seeking it. Some looked a bit too skinny, but we were assured the locals kept them well-fed. I always hear that on every trip when we see strays; In Egypt on the OAT trip, Egypt and the Eternal Nile, some of our group members felt so sorry for the cats and dogs that they gathered food from our table that we didn’t eat and gave them to the stray animals after we left the restaurants.

I did some research, and while it’s noted that many of these strays are really seeking food and comfort while baby kittens have a low survival rate in Morocco, other sources state the interest in cats dates back to the Koran. In the 7th Century, when the Prophet Mohammed praised cats because of their cleanliness, and felt they should be protected as one of God’s creatures. Under religious law, followers were allowed to perform religious rituals with water, and cats were allowed to drink from the same cup. However, dogs and pigs were not for reasons of non-purification. The Prophet Mohammed also simply liked cats, stating, “Affection for cats is part of faith.” Another Muslim scholar centuries later, compiled an authoritative text of the  Prophet’s sayings which has worked its way into the religion and has influenced it for centuries to come. He told a woman who had both caged and starved her cat that, “her punishment on the Day of Judgement [would] be torture and Hell.”

This religious history has only somewhat worked its way into actual practice, as I saw in both Morocco and Egypt. Some feel sorry for the stray cats begging for food; some revere the cats. The adoration of cats in Egypt goes back to antiquity as well, where they created cat-themed artifacts, and even the world’s first pet cemetery that dates back at least 2,000 years.  It’s largely filled with both cats and monkeys.

Whether cats are truly revered in the modern Muslim world, or their well-being left up to the kindness of strangers is for the traveler to discover. There is no doubt however, that they are highly visible in huge swaths of the North African Muslim world. People being people, and likely to go on about their busy lives even in North Africa, a sensitive animal lover might want to look into what the appropriate practice might be if their feel the felines need more food. I personally never touch stray animals when traveling  since I never know what kind of diseases they might have, even though I typically feel for any creature I feel might  be truly suffering. Others have no qualms at all, and are all too happy to feed them. But understanding they are ingrained in both the culture and the religion of the region makes them an additionally interesting observation for all travelers. And for all we know, many might be quite happy. I certainly hope so!

To learn more about contributing to the welfare of cats in Morocco, click here.