One of the most intriguing parts of the Sicily trip I rook with Overseas Adventure Travel called Sicily: Ancient Landscapes and Timeless Traditions, was the time we spent in the old Tunisian Casbah in the fishing port of Mazara del Vallo on the West coast of Sicily. Our day wandering the Casbah and enjoying the street art that had been left behind was a treasure for me. For street art tells the story of a people, and it was that story we were there to learn. 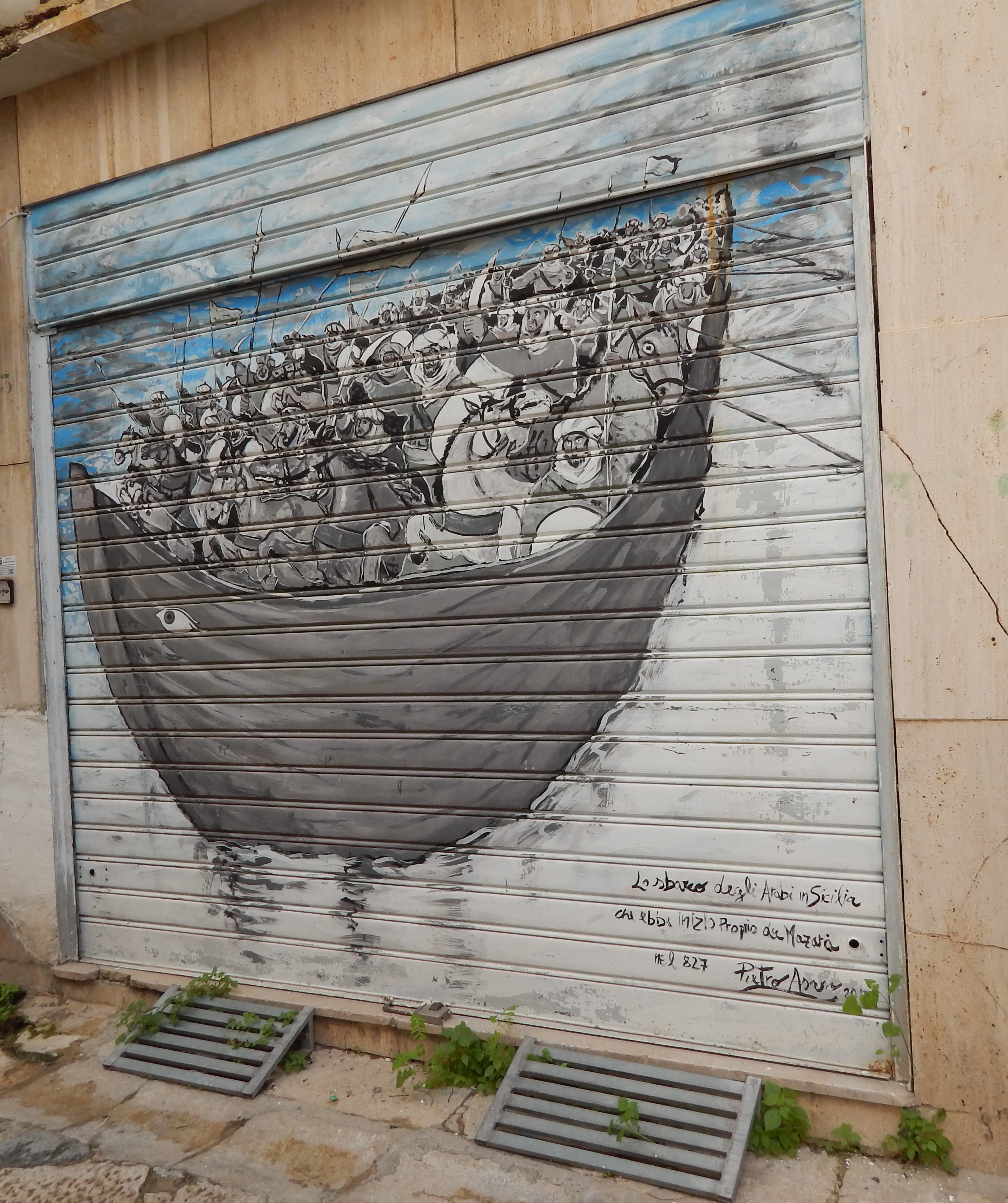 The Tunisian Casbah had been abandoned after the war, repopulated, then abandoned again after the 1968 earthquake, and today some gypsies can be seen there and very few others. But the street art was astonishing in its uniqueness and professional quality; some created in tiles on walls or benches, some painted on old, abandoned doors. We saw some of the people’s story during our stroll, as we saw art on one door of refugees coming in a boat from Tunisia. A good majority of the street art was sea faring in nature. Mazara del Vallo is a seaport, and the Tunisian story is one of a harsh arrival by sea under poor circumstances to an impoverished part of Sicily.

This part of Sicily is one of the poorest in Italy and has historically attracted immigrants from North Africa in particular because of its proximity to Sicily. We did in fact, meet women there one evening from Tunisia as part of our trip who were living in a shelter for battered women. So, while the region has been of particular interest over the centuries to the Normans, the Phoenicians, the Greeks, the Tunisians and others, the Casbah was strictly Tunisian in history, and the fishing village aspect of it had been preserved through the art.

Tunisian immigration to Sicily goes back many decades in the 20th century, as early as the 1960s according to my research. The Channel of Sicily was the main route. In April 1981, a ferry filled with 400 Tunisians landed in Mazara del Vallo and they headed straight for the Casbah. Some had already been living there, since the 1970s, some were new arrivals. However, the Tunisian population continually arriving ultimately took over this poor and abandoned area and made it heir own. Roughly 20,000 Tunisians were living in Sicily n 1970, and eventually made their way into more northern parts of Italy for a better life or were perhaps driven out by right wing elements. More recently, Tunisians have been arriving in Sicily for relief from Covid and in search of better medical care and quarantine. There is even an Italian population in Tunisia today.

I suppose it’s only fitting that during my three nights stay there, the seas were rough and unforgiving, and the weather was harsh. This to me is a metaphor for the likely plight of these immigrants until they could find themselves new lives and better circumstances in Italy. But fortunately for us, their street art remains intact, and their story will hopefully never be forgotten. The Tunisian street art tells the story of immigration and the need for rebirth and renewal under dire circumstances. Most cultures share this history, just borne out in different ways. We should honor all of it, because in many ways, it represents each of us regardless of our heritage.

To learn more about Tunisians in Sicily, click here, here, and here.